Jerry suffered from birth defects including poor eyesight, which kept him from driving a car. However, he became a tireless bicyclist as a teenager, logging thousands of miles, including rides to Denver and other distant locations. He had many interests and an unusually detailed memory. He had a particular interest in meteorology, recording the temperature, humidity, and barometric pressure every day for many years.

After completing his college degree, he moved to California in 1974, living at first in Oxnard, and later in Sacramento, where he remained for many years, moving to Oroville in 2008. He was a data processor for the State of California for 24 years, retiring in about 2006. Wherever Jerry lived he formed close friendships.

He was preceded in death by his parents, two brothers (George and Tom) and a sister (Mary). He is survived by his close friend and neighbor, Shirley Hardway, as well as nephews, nieces, cousins, and many friends. 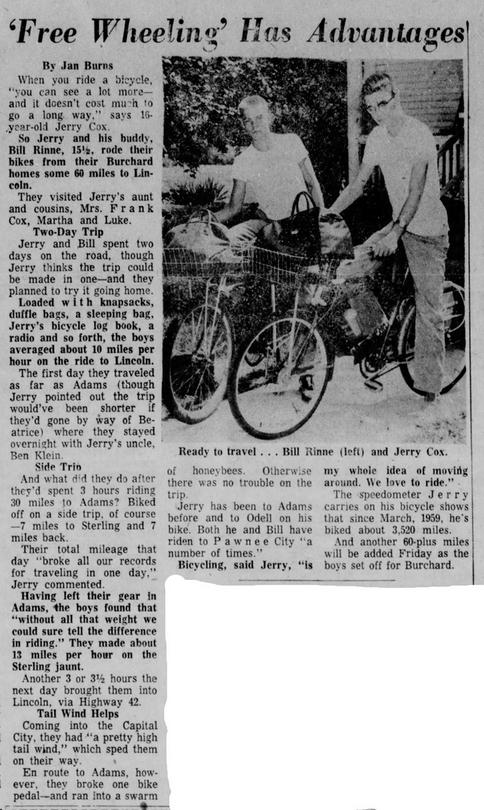 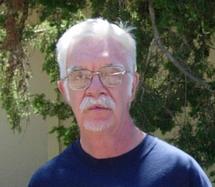 Jerry was born in Pawnee City on 22 December 1943, a son of Jerome and Dorothy (Disher) Cox. Had the Burchard school not closed in 1959, he would have graduated with the Class of 1962. He spent much of his life in Burchard until 1967, when he moved to Tucson. After a brief additional period back in Nebraska, he moved to California in the early 70s, where he lived the rest of his life.

However, he never lost his love for Burchard and, in 1993, he put together some of his memories of the town and the people, which are attached below. The first set of recollections was of Burchard in general, including the Burlington Railroad, the Fourth of July, Election Day, Halloween, the Burchard Weekly Planet newspaper, polio, Tom Cox coming home from Germany, the blue 56 Ford sedan, maintaining the Burchard roads pre-paving; Burchard Lake, Kansas roadhouses, babysitters, the town picnic, Herb LeSeuer's Sinclair station, changing schools to Summerfield, Lew Livingston, science teacher and coach, prairie fire, the tornado of January 11, 1960, Hurricane Carla, weather records, the streets of Burchard, and Jerry's long distance bicycle trips.

He then put together a second set, with some overlap, focusing more specifically on his family memories, including an attack by bees at age 3, New Year's 1950, the advent  of Television, the Mickey Mouse Club and Annette Funicello, radios and radio programming, Arthur Godfrey, Gunsmoke, Grandma Cox and the house fire, sister Mary and the phonograph, power mowers, cherry picking, school culture shock, "Huber, the Tuber," Charlie Starkweather, and a "woody" station wagon,

Back to Home
Burchard Recollections
View on Mobile